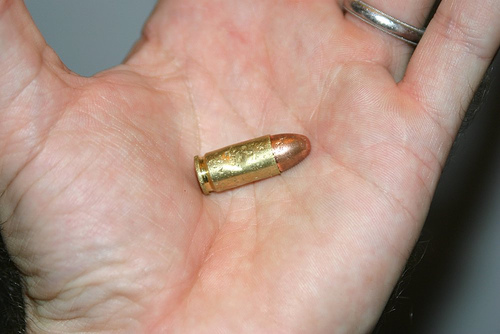 More than 300 people in the United States were struck by stray bullets between March 2008 and February 2009, often from shootings unconnected to the victims, according to a new study by researchers from the School of Medicine at the University of California, Davis.

Published in The Journal of Trauma and Acute Care Surgery, the study calculated the frequency of stray-bullet shootings during an 11-month period – a phenomenon, according to researchers, that resulted in at least 317 injuries.

Garen Wintemute, professor of emergency medicine and director of the Violence Prevention Research Program at UC Davis conducted the research, which was partially funded by the California Wellness Foundation and the Eli and Edythe L. Broad Foundation.

Using data collected from news alert services such as Google Alerts, in addition to GunPolicy.org archives, Wintemute and his colleagues tracked stories containing the term “stray bullet” for nearly one year, ultimately counting 284 shootings in which people were injured or killed by stray bullets.

The study defines a stray-bullet shooting any instance in which a bullet escapes the immediate scene of the shooting and results in the injury of at least one person either by directly striking the victim or through associated “secondary mechanisms,” such as injuries sustained from glass shattered by a bullet.

According to the study, 81 percent of victims injured in the stray-bullet shootings included in their research were either unaware of the events or totally disconnected from the events that resulted in gunfire. Stray bullets killed 65 people during the research period, with more than 84 percent of the victims dying the day they were shot and some 27.7 percent dying at the scene of the shooting.

Most of the shootings occurred in big cities, researchers found, with most stray-bullet shootings arising from violent conflicts, but injuries were also recorded following other events, such as hunting and sport shooting misfires and celebratory gunfire, usually from celebrations on Independence Day or New Year’s Eve.

The report found that the shooters and victims of stray bullets came from very different demographics. Most shooters in in the study are males between 15 and 34-years-old, but the majority of shooting victims were either younger than 15 or older than 34. In fact, children were victims more than 30 percent of the time and females made up nearly 45 percent of victims. According to the study, more than 68 percent of injuries occurred indoors, and some 40 percent of stray-bullet victims were shot while in their own homes.

In a press release issued by the UC Davis Health System, Wintemute said stray-bullet shooting victims were usually unassociated with the shooting events that resulted in their injury or death, stating they are frequently “innocent bystanders who typically have no opportunity to flee or take any other preventive measures.”

“Wearing body armor or taking other extreme protective measures is just not practical on a widespread scale, so we need to look at other ways to help communities feel safe from such events,” he said. “Given that these stray-bullet shootings are a byproduct of gun violence in general, it’s plausible that if you prevent the violence, you’ll prevent the stray-bullet shootings.”