WASHINGTON, D.C. – Twenty-year-old Edward Ward, a sophomore on the honor roll at DePaul University, tried to describe to U.S. Sens. Dick Durbin (D-Ill.) and Al Franken (D-Minn.), the only senators left in the room by the time he spoke on Capitol Hill Wednesday, what it was like to grow up in his neighborhood on the west side of Chicago.

“When I was 18, I witnessed a complete stranger’s killing mere feet from me in a neighborhood restaurant,” Ward said before the Senate subcommittee. “I was stopped by the police a few years ago. I saw them train their guns on me until I could show them the item in my hand was only a cell phone.”

Things didn’t get much better at high school, Ward said. “My school environment was very tense. The halls were full of security officers whose sole purpose seemed to serve detention. I felt constantly on alert – afraid to make the smallest mistake. I felt I couldn’t go to them for general security issues because first I would be interrogated.” More than 400 people crammed into hearing rooms in two separate U.S. Senate office buildings to hear lawmakers, educators, federal and court officials, and Ward testify about how punitive disciplinary measures at schools were funneling children into the criminal justice system, often for minor offenses like truancy or dress code violations, and at much higher rates if they were minorities.

This was the first-ever Congressional hearing on the subject, according to Dignity in Schools, a coalition of parents, educators and students advocating for the end of zero-tolerance policies in schools. Ward, who also works as a community organizer, is a member of the coalition.

Although many of his classmates wanted to succeed academically, they were hobbled by financial struggles at home and the responsibility of caring for siblings, Ward said. A classmate was suspended for being late to school, he said, even though she was tardy because she couldn’t leave her little brother alone at home until her parents returned from work.

There were lots of instances where his classmates were suspended or expelled for minor offenses that should have merited “a stern warning or a reminder,” Ward said. When they were suspended, they often disappeared for days — weeks if they were kicked out of school, he said.

“We have a discipline crisis in this country that must be ended,” said Judith Browne Dianis, co-director of the civil rights group The Advancement Projectand another witness at the hearing. “Police are arresting youth for things like talking back. That’s now ‘disorderly conduct.’ Writing on desks is now vandalism.”

At the same time, racial disproportionality in school discipline can be such that, within the same school district, a five-year-old African-American girl who set off a fire alarm was suspended for five days, while a white ninth-grader who committed the same offense was suspended for just one day, testified Deborah Delisle, the assistant secretary for elementary and secondary education at the U.S. Department of Education.

Held by the Senate Judiciary Committee’s Subcommittee on the Constitution, Civil Rights and Human Rights, the hearing drew so much public interest that it was shifted to a 260-seat room, the largest available, in the Hart Senate building.

Other witnesses at the hearing included U.S. Reps. Bobby Scott (D-Va.) and Danny Davis (D-Ill.); Melodee Hanes, the acting administrator of the federal Office of Juvenile Justice and Delinquency Prevention; Mike DeWine, the attorney general for Ohio; and Judge Steven Teske, chief judge at the Clayton County juvenile court in Georgia. (Judge Teske is a frequent op-ed contributor to the JJIE.)

By the time the hearing was to start, the first room was full. A mass of young people, many wearing Dignity in Schools t-shirts, was still lined up in the hallway outside, waiting to get in. Capitol Hill staffers soon escorted them three floors up in an adjacent building to a 150-seat “overflow room” equipped with a live video feed.

But that room soon ran out of seats too.

OJJDP’s Hanes told the senators that millions of children were suspended or expelled every year for minor infractions like truancy, classroom disruption or dress code violations. Fifteen percent were suspended 11 or more times, she said, and those were the kids who were more likely minorities and who were likely to end up in the juvenile justice system.

“Research has clearly indicated that children exposed to violence in the home or in school or in the community, those children suffer trauma. The evidence is conclusive that those children don’t do as well,” Hanes said.

Ward said his classmates’ experience bore that out. “A lot of youth from where I come from, they face huge struggles, huge difficulties,” Ward said. “We have to take into account the situations students face outside school to understand their actions when they’re in school.”

Any discussions of solutions had to include young people themselves, several witnesses said. “We can’t arrest our way out of this issue,” Dianis of the Advancement Project said. “Young people have to be part of this conversation.” 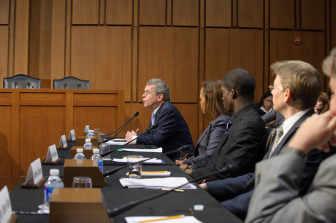 Solutions included developing greater consensus among experts about best practices, greater collaboration on research and data between federal agencies and better guidance for school districts and states on practices that maintain students’ rights. Other solutions proposed were greater public education on the necessity for appropriate responses to delinquent behavior, more training for police officers in crisis intervention and greater awareness on the part of the public and law enforcement on how to handle those from diverse social, medical and economic backgrounds.

“We’re basically using our criminal justice system as a substitute for a public health system and an education system,” Franken said during the hearing. “This is a bipartisan issue. There is no question about that.”