ATLANTA — Severe understaffing and failures in training and mental health procedures appeared to be factors in the Easter Sunday suicide of a 14-year-old at an Atlanta area youth detention center. 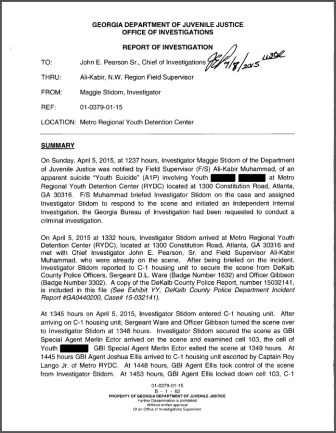 Click to read the investigation report by the Georgia Department of Juvenile Justice.

A state Department of Juvenile Justice probe, while drawing no direct connection, listed dozens of violations of DJJ policies in a 78-page report on the death of Jimariya Davidson. Two employees were fired and eight others disciplined as a result.

The findings illustrate what some observers see as a frequently found gap between carefully considered policies and everyday practices in youth prisons across the country.

Davidson was found unresponsive April 5 in his cell at the Metro Regional Youth Detention Center in DeKalb County. He had hanged himself, DJJ said, from a jumpsuit tied to a sprinkler head in his cell. (A DeKalb police report previously identified Davidson, but DJJ redacted his name from the report released Tuesday.)

Metro RYDC, which normally holds about 120 youths, was operating that day with a staff of just 18, well below the facility’s minimum of 29, according to the report. After the fact, the report said, a department analysis found Metro should have had 39 staffers on that shift.

Davidson, the report said, had been improperly denied basic amenities while being held in disciplinary confinement. He couldn’t take a shower in his cell because the water was inexplicably turned off. He was denied mandatory recreation and leisure time for two days before his death.

Finally, when the scheduled time for Davidson’s release from lockdown came and went that Sunday with no action, the report said, he took steps on his own.

When Officer Adrian Cooper did not respond to Davidson’s calls for release, he “began to say that he was going to kill himself,” a youth in a neighboring cell told DJJ’s investigator.

Another youth said a supervisor, Lt. Brandon Waters, told Davidson that morning he would not be coming off lockdown, the report said. Davidson, the youth said, “told him to tell Cooper that he was going to kill himself and to call Lt. Waters.” When Cooper called Waters, the lieutenant said he was busy. (Waters said he never got that call.)

Cooper, the first youth said, didn’t check on Davidson for another 45 minutes, after being told the 14-year-old had something around his neck.

Davidson had been confined to his cell for three days after spouting profanity at a teacher at the facility and threatening to harm her, the investigation found. Officers said they handcuffed him before returning him to his cell because he had a history of head-butting, spitting and biting the facility’s staff.

The DJJ report contained conflicting accounts of Davidson’s state of mind. One youth said Davidson was depressed and always wanted to talk about the death of his brother, who he said had been shot in the back of the head in January. Davidson also said he hadn’t seen his family in a year.

(A lawyer for Davidson’s parents said he believed Jimariya was referring to a close friend rather than a brother. The lawyer added that his clients had visited their son at the RYDC and spoke to him regularly on the phone.)

Another youth, though, said Davidson showed no outward signs of being troubled. “If [he] was depressed, he did not show it,” the youth told investigators. “[He] was always playing and joking with others and always talking about fighting someone and playing basketball.”

A third youth described Davidson as a “drama queen” who often talked about harming himself. Davidson, the youth said, “would bite the inside of his mouth and make his nose bleed and put it on the window so the security staff could take him out of the cell.”

Counselors did not check on Davidson on either the Friday or Saturday before his death as required for all youths who are confined to their cells, the report said. One counselor, who forgot to record a “crisis note” on Davidson before leaving work Friday, said she “panicked” and called an intern that Sunday to have the note entered after the youth’s death.

Many of the facility’s failings had been identified in a February 2014 audit but had not been corrected by the time of Davidson’s death.

Pamela Mitchell, the RYDC’s former director, said she had assigned managers to oversee steps to ensure compliance with DJJ policies, but staffing issues got in the way.

She told a DJJ investigator she was “not surprised that things were falling apart due to not being properly monitored and this is a result of staffing vacancies.”

DJJ’s report substantiated allegations against Cooper, Waters and 10 other current and former staffers at Metro RYDC. Cooper and nurse Kawana Wires, who did not try to resuscitate Davidson and told others to stop their efforts, were fired.

Lawyers for Davidson’s parents, who have filed a $1 million claim against DJJ for its alleged “indifference” to his expression of suicidal thoughts, said Tuesday they are continuing to investigate the circumstances of his death.

“It is clear, however, that Jimariya’s death was completely preventable, and the Georgia Department of Juvenile Justice has committed grossly negligent acts for which it must answer,” attorney Eric Fredrickson said in an emailed statement.

Juvenile Detention Centers: On the Other Side of ‘Lock ‘Em Up,’ but Not Quite Trauma-Informed