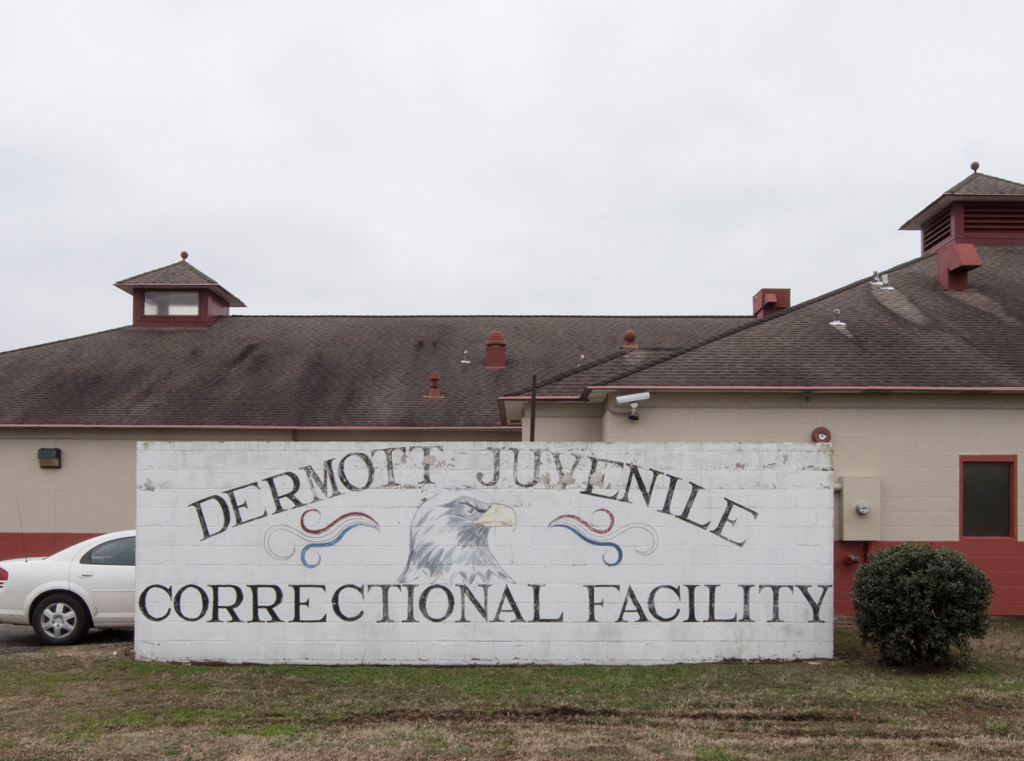 Outside the Juvenile Correctional Facility for 18- to 21-year-olds who committed crimes as youth, but have yet to complete their treatment plans.

Teenagers confined to two state-run South Arkansas juvenile lockup facilities saw many of their basic needs neglected for much of 2017, an Arkansas Nonprofit News Network investigation has found.

Nine current and former workers at the juvenile facilities, in Dermott, told the Arkansas Nonprofit News Network that youths regularly lacked sufficient hygiene supplies, including soap, shampoo, toothpaste, toothbrushes and laundry detergent throughout 2017. During the fall and winter, until Jan. 27, the youngest teenagers confined at the facilities did not have coats.

Senior staff at the Division of Youth Services (DYS) said their records did not reflect chronic supply shortages. But DYS Director Betty Guhman conceded serious problems existed at the Dermott facilities, including a snag in the state’s procurement process that left teenagers at the treatment facility without coats until late January.

“That should never have happened,” she said. More generally, she said, “We realize that some things have slipped between the cracks, and we don’t want that to happen. We want to stay on top of it.”

The Dermott Juvenile Treatment Center for 13- to 17-year-old boys is one of seven juvenile lockups referred to as treatment centers by the Arkansas Department of Human Services’ DYS, which oversees them. As the name suggests, treatment facilities are intended to be rehabilitative rather than punitive. Youths committed to the facilities must complete treatment plans designed by the DYS, rather than time-based sentences. Under state supervision, they are referred to as “clients” rather than “inmates.” The nearby Dermott Juvenile Correctional Facility houses 18- to 21-year-olds who were committed to a treatment center as juveniles but have not yet completed their treatment plans.

In January 2017, at Gov. Asa Hutchinson’s direction, the DYS took direct control of seven of the state’s eight youth lockups, including the two facilities at Dermott. The lockups had been operated by two nonprofits, South Arkansas Youth Services (SAYS) and Consolidated Youth Services, for over 20 years; SAYS ran the Dermott facilities (SAYS recently filed for bankruptcy; the filing indicates that the FBI and the Arkansas attorney general are investigating the nonprofit).

The unexpected takeover order came in response to a political stalemate over the DYS’ decision to switch to a new vendor. Legislators sympathetic to the ousted nonprofits blocked the new vendor’s contract in late 2016, which meant the state would have entered the new year with no one to run the facilities at all. But Hutchinson directed the DYS to assume direct management of the facilities, and, in a matter of days, some 300 staff members at the facilities were converted into state employees. The state had not directly operated any of the treatment centers in more than 20 years.

Shortly after the takeover, Disability Rights Arkansas, a nonprofit advocacy group that is federally designated to monitor state juvenile lockups, said the DYS was struggling to maintain day-to-day operations at the lockups. According to a Jan. 26, 2017, letter to Guhman from the nonprofit advocacy group, mental health therapy had all but ceased at the facilities. The Dermott facilities were chronically understaffed and residents were living in what the letter described as “deplorable conditions not conducive to rehabilitation.”

That conditions at the Dermott facility have not improved after a year of state control is a sign that lawmakers need to take a closer look at the juvenile system, said Tom Masseau, executive director of DRA.

Knuckles, 16, was committed to the Dermott Juvenile Treatment Center in April 2017 and released in October. (Because he is a juvenile, the Arkansas Nonprofit News Network is identifying him by his first initial only). He said that for most of his time in Dermott, the treatment center did not provide him with basic hygiene supplies, including soap, toothpaste and laundry detergent. He said direct care staff he was “cool with” would sometimes personally supply him with what he needed.

K.’s father, Benjamin Knuckles, repeatedly called to complain and offer to provide toiletries for his son. Youths at the juvenile treatment center.

“My son’s a very clean person. That stuff drove him crazy, not having hygiene stuff,” Benjamin Knuckles said. “They kept telling me, ‘No, you can’t do it,’ but I guess they finally had enough issues where they couldn’t provide the stuff.” In September, he said, “They finally started saying the parents could bring the kids like soap, toothpaste, things like that.”

While K. was committed to the treatment facility, he said only one other youth, among the 32 housed there, received supplies from family. K. also said that for nearly his entire time at Dermott the facility only provided him with slip-on sandals. Benjamin Knuckles said he sent his son a new pair of shoes for which he paid a little more than $100. K. wore the shoes one time and then turned them over to his case manager because other teenagers had threatened to steal them.

Jimmie Bynum, a former direct care staff member at the juvenile correctional center, echoed the Knuckleses’ accounts. Bynum said staff regularly bought the likes of toilet paper and soap out of their own pockets for clients before parents were allowed to send supplies.

Tensions emerged when some youths received shoes and supplies while others did not, Bynum said. “Some of the kids wore Nikes and other kids had to wear lesser shoes. It caused a problem.”

(Bynum was fired in November 2017 for using unnecessary physical force on a client. A Dermott Police Department report said video of the incident showed the youth take a pen off Bynum’s desk. When Bynum demanded it back, the youth hit him in the face and a struggle ensued. In the course of the struggle, Bynum received a cut on his hand and the youth received a 4-inch cut to his stomach that required stitches. The Dermott police concluded the cuts came from the pen and cleared Bynum of any wrongdoing. Bynum said there was no way he could follow the state’s required protocol for subduing clients while being attacked.)

For all of fall 2017 and much of this winter — including in the final weeks of December and first several weeks of January, when the average daily temperature was often below freezing and the temperature in Dermott dropped as low as 6 degrees — none of the nearly three dozen teenage boys confined to the treatment center had coats or jackets to keep them warm as they moved between the buildings on campus and engaged in recreation time. Despite a procurement request made in September by facility staff, the state did not provide the children outerwear until Jan. 27.

Antonio Willis worked as a direct care staffer in the correctional facility from May to September 2017. He quit, he said, because the stress of the job was negatively affecting his health.

“They didn’t have hygiene supplies,” he said. “We were supposed to give them out every Monday, but I worked there for [almost] six months, and I can remember doing it like six or seven times. I remember kids would have to share the little bottle of soap that they would get from their parents, when their parents come visit them. They would share that little bottle of soap with the whole dorm room [of eight residents].”

A current staffer at the correctional facility, who asked to remain anonymous for fear of reprisal, said clients “never have any hygiene products,” such as deodorant and toothpaste, and that supervisors had regularly purchased soap with their own money for clients. The staffer said some of the residents without shoes had been forced to wear slip-on sandals outside during rain and cold weather. The employee called the lack of proper shoes neglect. “What if the kid catches the flu or pneumonia or something like that?” the staffer asked.

DYS Director Guhman said the abrupt state takeover of the lockups in January 2017 made it difficult to integrate the facilities into the state procurement process and led to supply shortages initially, but she said she believed those issues had largely been corrected. She said she could not find records indicating that Dermott facilities went without critical supplies for long periods.

“Facility directors keep inventory, they submit their requests, and those are filled. … I don’t know what to say about not having enough hygiene supplies at this point in time,” she said. “Yes, early on, that was an issue, but we feel like that’s been addressed.” But in an Oct. 30 email obtained through the state Freedom of Information Act, John Whaley, who was then the director of both Dermott facilities, complained to Guhman and another senior DYS official that requisitions for clothing, shoes and hygiene items were submitted July 13 and resubmitted Aug. 22. He said that a requisition for a barber to cut residents’ hair was submitted July 7 and not approved until Sept. 7. “Numerous other requisitions have been submitted and delayed for unknown reasons,” he wrote.

The DYS provided copies of purchase orders for hygiene supplies and clothing from September 2017 and January 2018. On Feb. 12, a spokesperson for the division said the DYS had not been able to locate records related to July and August 2017 requisitions.

Whaley submitted his resignation Nov. 27. Reached by phone, he declined comment. The DYS said he resigned ahead of termination. April Hannah, DYS deputy director for residential operations, said the agency was seeking to institute a “culture shift” at the lockups now under its control.

“A change of leadership at the facilities was necessary because of issues that were repeatedly noted as unsatisfactory and explicit expectations going unmet,” Hannah said in an email. “Those issues extended to management of staff, communications with supervisors regarding urgent needs, operational issues that were ineffectively addressed. … We needed to foster a culture of accountability, communication, and effective management. We felt like different leadership would better support those goals.”

Guhman conceded that the youth division has had problems managing the lockups.

“We recognize there are problems,” she said. “We absolutely do not want these kinds of things to happen. That’s not the way we do business. … I don’t want and nobody else wants to work for an agency that allows this kind of stuff. So our job is to put something in place that’s going to prevent this.”

To that end, the DYS recently established a three-person facility review team that will make monthly inspection reports. The division previously conducted inspections semiannually. Guhman also said senior DYS staff would be reviewing critical needs at the facilities. When necessary, she said, the agency can use an emergency procurement process to quickly obtain any urgently needed supplies. She said senior staff would be meeting weekly to discuss progress.

In August, Hutchinson and Guhman announced the lockups would be returned to private contractors as soon as the summer of 2018, with a request for proposals to be issued by the end of 2017. But the DYS recently said it would not ask for proposals until early next year, which would mean the youth division would retain control of the lockups until at least July 2019. In the meantime, the DYS said it would commission a study to determine how to better serve the youths committed to its supervision.

Advocates have long pushed the state to close or reduce the number of residential lockups, which they argue are harmful and counterproductive for many youths, and invest more in community-based alternatives. Guhman stopped short of explicitly saying there should be fewer secured beds, but she did say a reassessment was in order.

“Maybe it would be better … if we had four secure facilities and three less secure — group homes or transition homes or something like that. If you look at our stats, 90 percent of our kids have committed nonviolent offenses … and yet we’re treating them all pretty much the same,” Guhman said.