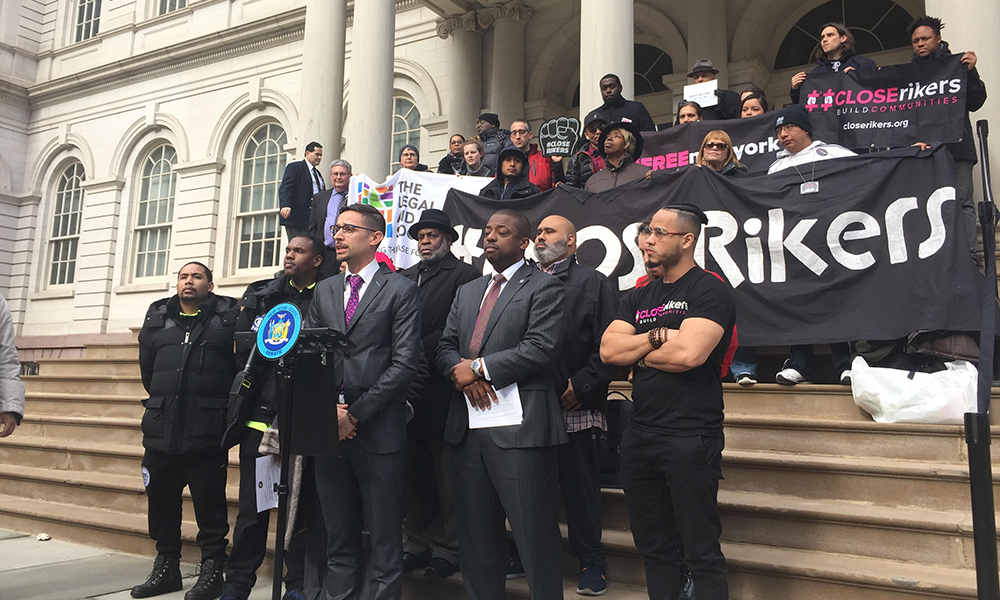 NEW YORK — They stood on the steps of City Hall; faith leaders, community organizers, formerly incarcerated men and women. They stood behind Democratic state Sen. Brian Benjamin with banners in their hands. One read: “#closerikers.” Another: “Free New York.” Among them was 26-year-old Vidal Guzman, dressed in black except for, across his chest, “#closerikers build communities” in white and pink.

He listened as Benjamin spoke, and walked up to the microphone when his name was called.

A former inmate, Guzman first went to Rikers at 16.

Standing in front of the podium, Guzman spoke of the way Rikers has stolen the fathers, sons and brothers of the minority communities. He spoke with the passion of someone who experienced the violence and trauma of incarceration at a young age. His main goal was to convince everyone gathered around him, the importance of closing Rikers and keeping young men and women out of jail. Although he is now rallying against Rikers, Guzman’s time in there showed him that it is not a solution for any person in society, muchless a young teenage boy.

“There’s no way you should send any individual that’s 16 or 17 years old to jail or think that that is the way to solve a problem,” Guzman said.

Raised by a single mother in Harlem, Guzman began selling drugs when he was 9 years old to help his older brother put food on the table.

“I see my brother selling drugs,” Guzman said.  “I started selling drugs just like him. That was the conditions that was happening around us. You see everyone else doing it, it becomes regular.”

By the time he was 15, Guzman was part of a gang. At 16, he was arrested for robbery and drug possession, tried as an adult and sent to Rikers Island.

“When you’re 16, you always expect something, probably police would like slap you on the hand and you’ll go home,” said Guzman. “That wasn’t what happened.”

His first day in Rikers was a nightmare because he couldn’t go home. By the end of his first week, he saw three teenagers commit suicide. “When that happened, I knew that I was in a place that was torture,” he said. “It was torture island. It took people to take their lives to not be in this environment.”

Guzman was welcomed by his peers the second week when 20 teenagers ran inside his cell and beat him up, only stopping when a corrections officer stepped in.

For almost two years in Rikers, Guzman said he had to fight physically and mentally every day. At 18, he went home, but he was changed.

His first week back, he would wake up with his fist balled up, thinking he might get into a fight. He’d forget he was back home.

At 19, Guzman was sentenced to Greene Correctional Facility for five years after being sent to Rikers again for drug- and gang- related activities. Despite being thrown into solitary confinement multiple times during his sentence, Guzman said his second time in prison was different because of another detainee serving 25 years to life. Guzman said the detainee told him that he had the opportunity to go home compared to others. After the conversation, Guzman said he landed in solitary confinement a month before he was supposed to go home.

This time, though, he realized that he had to change.

“I came home on a mission,” Guzman said. “I was on a mission to be someone that could prove everyone wrong, even my own family members.”

Guzman became a fellow of Drive Change, a nonprofit organization that gives formerly incarcerated youth on-the-job training, and employs them to work on a food truck. Roy Waterman, cofounder of Drive Change who had also been locked up for 12 years, said when Guzman came to Drive Change in 2015, he had a “higher grasp for life.”

“He came in energized, motivated, really mature for a younger guy,” Waterman said.

At Drive Change, Guzman began organizing fundraisers for the homeless, events with Black Lives Matter and anti-sex trafficking protests. He said he realized he had a gift for influencing people. He was  introduced to the #CLOSErikers campaign when Jordan Lexton, the co-founder of Drive Change, forwarded him an email that read: ‘hey we’re trying to close rikers.’

“I never heard that in my life,” he said. “To hear that it’s going to close down was like justice for me.”

Guzman joined the campaign and the Just Leadership USA organization as a community organizer. He organizes 300 to 400 people to protests and different rallies. He also organizes formerly incarcerated people to get involved in state issues.

“To successfully close Rikers, you need speedy trials, discovery law and bail reform,” Guzman said. “We have to really understand what’s the neck of all our problems in our community is mass incarceration.”

Guzman said that Just Leadership’s ultimate goal is to end mass incarceration across the nation by 2030. The way to do that, he said, is getting formerly incarcerated individuals to get involved in the community.

Waterman, who now works as the criminal justice project manager for Jewish Council for Public Affairs, said Guzman has “found his purpose, which is to speak out publicly about mass incarceration. He has the uncanny ability to engage and speak to people publicly.”

At City Hall, Guzman looked out at the small crowd gathered and declared that Rikers needs to close. Not 10 years from now as Mayor de Blasio originally planned, but now. Although de Blasio amended his plans this year, Guzman said it was due to the campaign and other organizations around the city pressuring the mayor.

“I’m here right now. I won’t believe three years ago that I’ll be here, working for this campaign, seeing when it’s first running and feeling like nothing was moving, and then one day to hear Mayor de Blasio say, ‘we want to close rikers,’” Guzman said.

He added, closing Rikers Island is not a job for him:  “It’s a passion.”