This story is part of an ongoing series about juvenile indigent defense. 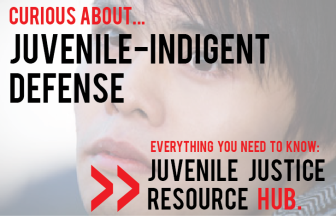 “I’m a product of the ‘60s,” Drayton said. “We felt like the best way to change things was through the law.” After three decades as a Morehouse College professor, he said he wants to finish his career by working with disadvantaged children.

So, for the last six years, Drayton has worked as a juvenile public defender.

His case today is centered around a teen who allegedly attacked a hotel worker. “She identified my client as the one who hit her,” Drayton said. “Really, we don’t have a defense, because his biggest problem is, he was out at 12 o’clock at night and he’s 13-years-old.”

It’s the boy’s first case, Drayton said. He’s eyeing one-year suspended probation, with a court officer monitoring the youth in school and at home. “Our goal is to keep kids from graduating into the adult system,” he said. “So we want to keep an eye on this kid, because we’ve already seen at-risk behavior.” Public Defender Jerry Drayton, 66, said local delinquency is symptomatic of a much larger issue in the community -- the effects of living in poverty.

Drayton, whose salary is paid by the state, is in juvenile court every day of the week. He deals with uncooperative parents, a backbreaking caseload and, perhaps most troubling, a general lack of juvenile indigent defense (JID) funding.

Drayton’s struggles are typical among those who work with indigent children. However, he refuses to view his clients as “the problem” — rather, he believes their actions are symptomatic of a much larger issue within many U.S. communities.

Drayton makes his way through the winding halls of the facility. There’s a sweet aroma throughout the building. Outside the courtroom, several individuals — almost all of them African-American — wait, with dour expressions on their faces.

The pre-hearing camaraderie in Judge Steven Teske’s courtroom is amiable. Court appointed advocates in the back of the court update their Facebook statuses on their smartphones, while officers stoically flank the sidelines. Drayton and the court prosecutor have a friendly chit-chat, while one of Drayton’s colleagues thumbs through a large book that has the words “public defenders” scrawled across it in black marker.

Teske enters the chambers, wearing a brown suit with a yellow tie and handkerchief. A new advocate is sworn in before the hearings. The first item of the morning is an update on a deprivation case — three children in the county foster care system are in need of a new placement. The next is an update on a recent disposition; new case plans for a child with bipolar disorder are discussed.

A small, thin, African-American girl in a denim jacket enters the court. A third party petition for her custody has been dropped. She leaves the court almost as quickly as she enters it.

Next, a young African-American boy enters with his parents. He’s wearing a windbreaker and khakis. Earlier this year, a school resource officer allegedly overheard the boy tell another student that he was going to do a “1-8-7” on him. The prosecutor explains that “1-8-7” is a street term for a homicide.

Teske spends several minutes explaining the court process to the young boy. He then discusses the duties of the public defender. “He doesn’t have to please me,” Teske tells the young boy. “He doesn’t work for me … [Drayton] knows I cannot fire him.”

The young boy, Teske said, has gotten into trouble with a local gang. In a prior meeting, Teske said, the youngster informed him he was afraid of entering a “mainstream school.” That fear forces the young man to act “tougher” than he wants to be. The young man and his mother and father are ordered to receive Functional Family Therapy (FFT) services, and the juvenile is appointed a probation officer.

“Pray, be patient, keep working at it,” Teske tells them. They exit the courtroom, and Drayton’s other client enters. The African-American boy is thin and short, and wears a black dress shirt and black dress pants. His father, a very large man, is wearing similar clothing.

The defendant is on trial for battery, loitering and prowling. An officer takes the stand. He recalls talking to the victim after the incident; her eye was swollen, as if she had just been punched.

The defendant places his hand under his chin. He begins to slump ever so slightly in his seat.

Drayton asks a few questions of the officer. The prosecutor objects to one of his inquiries, on the grounds that his question involves hearsay. The objection is sustained.

The victim then takes the stand. “I was hit in the head,” she recalls. She said she was about to enter her place of employment, when she felt a brick-like object connect with the right side of her face. She turned around, and saw three young people backpedaling.

Teske asks her if she sees her attacker in the courtroom. She points at the defendant. She’s “100 percent” confident that’s the boy who hit her.

Drayton huddles with his client for a minute. Then Teske renders his verdict: the boy is “guilty” on all three charges.

Teske tells the boy that if the victim had lost consciousness for even one second, he could have been found guilty of aggravated battery. That charge, Teske said, carries a maximum juvenile sentence of five years.

“This is your first case,” Teske tells the boy. “I hope it’s your last.”

(Days later, the boy was placed on an “informal contract” — in exchange for having his charge dismissed, the boy agrees to abide by certain stipulations, which often include not being suspended in school and not hanging around kids who are on probation. If the boy violates any of the contract’s requirements he can be re-sentenced.) Drayton is a man who doesn’t like to stay stationary. Even while sitting, he likes to periodically hop up and down in his seat.

“Judge Teske’s really a progressive judge,” he said. “He tries not to lock kids up, he tries not to beat them up because we’ve found all those things don’t work.”

He believes that many of the less-punitive policies implemented by Teske will become more commonplace throughout Georgia following the recent passage of a statewide juvenile code rewrite. But in the face of a strained budget, Drayton says he would like to see more juvenile indigent defense funding across the state.

“I’d like to see the money that the D.A.’s get for hiring experts … I’d like to see some of that come our way,” Drayton said. “Now that we don’t have the money for those psychologists, we’ve got one hand tied behind our back.”

School-related cases are becoming rarer in Clayton County, Drayton said, since most of those cases are now handled outside of court. Residential burglaries and family violence incidents, however, appear to be on the upswing.

Many of the young people Drayton represents, he said, are latchkey children. Their mothers work erratic hours and struggle to support their kids, and many times, the fathers are either in jail or out of the picture altogether. Many families he represents lack automobiles. Some don’t even have telephones.

He reflects on his case from earlier.

“I talked to the victim, and she was adamant about the fact … that he was the one who hit her,” Drayton said. “I’m kind of concerned that you’ve got a 13-year-old who, seemingly, can’t empathize with a victim.”

The “calculated meanness” of the incident, Drayton said, truly disturbs him. Young people living in poverty often find themselves adopting value systems that are less critical of antisocial behaviors, he said.

“The delinquency we are seeing,” he says, “is really a symptom of a disease we’re not treating.”